You are here: Home / Binaural Beats / Everything You Need to Know About Isochronic Tones

First let's understand how isochronic tones work, and how they differ from their binaural beats cousin.

Isochronic tones have a pulsating sound. This is because the tone is being turned on and off rapidly, which creates a pulsing effect. This creates a sharp, distinctive pulse of sound.

In terms of the pattern, imagine an alarm clock with its equally spaced beeping, that's kind of how isochronic tones work, compared to that of the continuous hum sound of an off-air tv channel, which is kind of how binaural beats work.

It's not the best analogy, but I'm sure you get the picture: one is intermittent and the other constant in form.

Isochronic tones excite the thalamus, encouraging the brain to follow along to the frequency of the tones.

The image below shows a wave form of each, perfectly demonstrating what I mean. 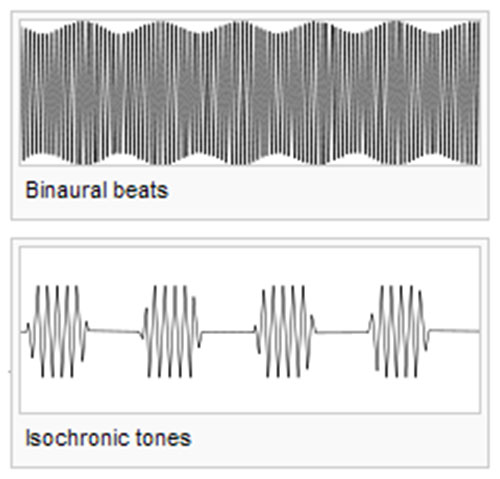 Unlike binaural beats, headphones are not required. This means you can listen out loud through speakers.

This is because isochronic tones use one tone, while binaural beats use two tones (sound frequencies), a different one to each ear – which then triggers the brain to follow along at the mathematical difference between the two frequencies.

However, for isochronic tones you need to be fairly close to the speakers, as the entrainment diminishes the further away from the speakers you get. Indeed, I personally think this calls into question how practical it is to not use headphones.

From my personal research in the studio, I think it is always best to be as close to the source as possible and to be aligned perfectly with the sound.

When listening through a pair of speakers, it would be best to sit with a speaker equally spaced from each side of your head, so that you are hearing the tones at an equally proportionate distance.

Because isochronic tones produce one tone, it is potentially possible to use headphones and send two tones to the brain at the same time: one to the left ear and one to the right ear. Some producers like Transparent Corp  tout this as a benefit, but it's a moot point in my experience, because it is always more effective to focus on one frequency at a time.

There are some wild claims online about the effectiveness of isochronic tones by some sellers, and while I can say anecdotally that they seem to work quite well in the gamma range, there just isn't any peer-reviewed evidence to back up their effectiveness.

I have dug deep, and the best I can come up with is a couple of studies on perceptual synchronization that required subjects to detect irregularity in tones, which is not of use in determining the effectiveness of isochronic tones.

This in stark contrast to the amount of research into binaural beats, which dates back 30 odd years or more.

Perhaps this is because isochronic tones are newer in terms of popularity, and therefore it'll be a few years before studies emerge. That said, the theory has been there for just as long as binaural beats, so why the lack of interest from researchers?

The Pros & Cons of Isochronic Tones

What we lack in research we have in trial and error, individual accounts and facts about the way the tones work. So for now let's use these insights to look at the pros and cons.

Unlike binaural beats, isochronic tones must be audible to be effective. While they have the benefit of not requiring headphones, the audibility factor is a potential barrier for many.

Binaural beats can be mixed very low in a musical composition, to the point of inaudibility, whereas Isochronic tones need to be heard quite prominently.

The problem is that the sound of isochronic tones isn't always very pleasant.

While people generally like the “hum sound” of binaural beats – as long as there is no dissonance created with the accompanying music – many people find the pulsating nature of isochronic tones quite off-putting.

The tones are generally mixed loudly within the composition, which is ultimately not very relaxing or conducive to meditation, sleep, etc.

This leads us on to another problematic area. The majority of people want to listen to meditation music, binaural beats, etc., to relax, meditate, achieve better sleep, focus or relieve anxiety or stress, but if you don't like the sound you are listening to, then it's unlikely that you're going to achieve those states successfully.

Moreover, by nature of design, isochronic tones are said to be fairly ineffective at entraining in the low frequency ranges (delta, theta). Arguably, these are the two most popular brainwave entrainment music states, and thus people generally choose binaural beats for lower frequency entrainment.

This is actually an opinion shared by many professionals

Following on from the above point, some people also find that isochronic tones can be problematic at very low frequencies, and as such aren’t really suitable for delta entrainment.

The creator of Gnaural states:

Binaural beats appear to have advantages over other auditory approaches by being more efficient, both as a true low-frequency sinusoidal stimulus and by engaging more neural circuits than conventional hearing. BBs are also less invasive than some of the non-auditory approaches such as photic or electromagnetic, which are effective but induce seizures in a percentage of the population. In my experience, binaural beats have been as harmless as anything else I listen to through headphones.

My Experience with Isochronic Tones

My take on isochronic tones is that they are not for everyone. Some people just can't get past the pulsating nature of the tone. If you're new to brainwave entrainment music, or coming from a binaural beats background, you may struggle to catch the vibe.

That said, if you like to experiment, if you like the sound of tones and sound waves in different formats, if your ears can handle something a little alien, I think you might dig it.

I'm into it and enjoy experimenting, but my preference is binaural beats. Am I biased? Partly, yes, because I've been using them successfully for many years and have got a lot from the music. But my bias is also based on the fact that there is more research to support the effectiveness of binaural beats.

Moreover, I pretty much always use headphones for brainwave entrainment, so the fact that you don't need headphones for isochronic tones isn't a selling point to me. I do listen to binaural beats without headphones, but then it's just to listen to the music as relaxing, ambient music while working or in the background while socialising at home.

If you are going to experiment with isochronic tones, I suggest trying Beta and Gamma tones, ones in the high frequency ranges designed for memory enhancement and wakeful states rather than for relaxation and stress relief, etc.

In terms of where to buy some isochronic tones from, check out Unexplainable Store here.

They have been in business a long time and are quite well known for their tones. Expect some pretty mind-tweaking tracks. The music isn't always pretty but can be effective.