True to form, there is a lot of misleading information online about monaural beats and a lack of substance to back up the claims.

What I mean by that is some information just outright dismiss them as ineffective, without any justification, whereas others will say that the best thing since sliced bread, again without any substance to back it up.

What I also found was that the majority of explanations on how monaural beats work are really confusing. In many instances, I'm not even sure that the author really understands what they are writing themselves. That sounds a bit condescending, I know.

But what I found was that people were regurgitating the same information, which was probably taken from quite a technical source, i.e. someone who did know what they were talking about, but when you try to rewrite the information it doesn't make sense.

So in this post, I breakdown what monaural beats are, and what the difference is between this type of brainwave entrainment and binaural beats.

Disclaimer: Although my website title is binaural beats freak, I only have preference for what is most effective according to the science available, and in my experience. 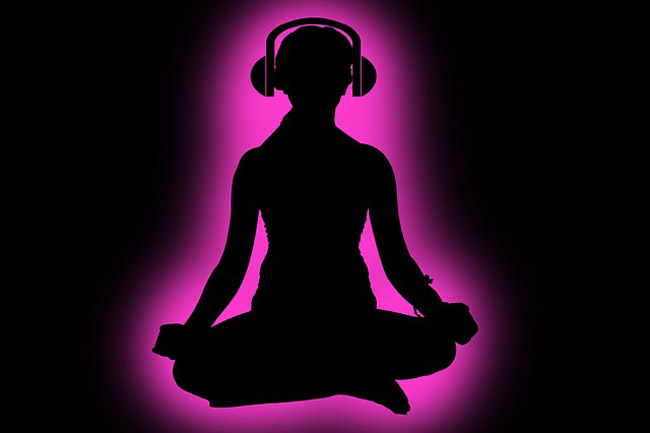 What Are Monaural Beats?

To understand monaural beats, we simply need to understand what the word monaural means and what it relates to in terms of music.

Monaural sound is also known as “monophonic” sound or simply “mono”. like so many words, the word mono comes from the Greek language:

You may have heard this word referred to in a musical capacity, as you would have with the word “stereo”.

Because mono sounds are audio signals that are mixed and then routed through a single audio channel. With mono, there is no spaciality. The sound in each ear is identical.

The mono sound is reproduced through speakers, with each speaker reproducing a copy of the same signal. So you hear the mono signal through the left and right channels (ears) of your headphones, or out of each of your speakers, left and right.

So mono is a single signal, and stereo is two signals (or more), usually just to sent to a left and right channel.

Look at the screenshots below from my music software program. The first image is of a mono signal playing. 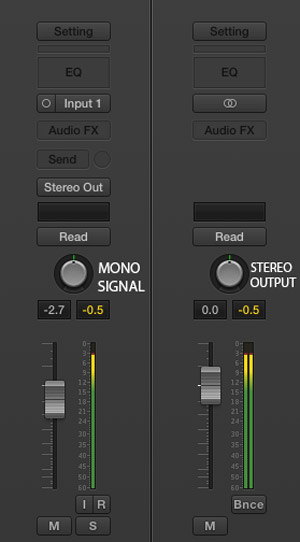 Mono signal. One sound playing on a single channel, but outputted via the stereo output so it can be heard in the left and right ears of headphones or speakers.

Can you see how it has only one illuminated bar, yet on the output signal (the channel on the right) it is being played back on both the left and right channels.

So this mono signal is being mixed though the left and right channels to provide a stereo signal (left and right) for the listener. 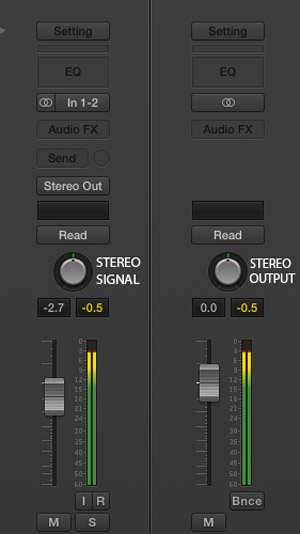 Here's another way to look at it. 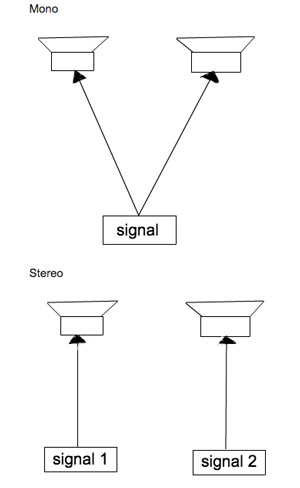 How to Create a Monaural Beat?

Monaural Beats are created by the convergence of two separate frequencies. The signal is then outputted to the left and right channels so that the listener will hear the both frequencies in each ear. This directly stimulates the basilar membrane of the inner ear.

We then output the converged (mixed) signal to both the left and right channels, which means that when listening through headphones or speakers you will hear the same two frequencies playing in each ear (essentially a replication of the mono signal in each ear), and hear the difference between the two, which is 5 Hz.

So unlike binaural beats, the effect is created externally, before it reaches the ear. Let's elaborate on that…

With binaural beats, the desired frequency is created when two separate frequencies are perceived by the brain. A frequency is sent to the left ear, and another to the right.

So, if we take the same above example, instead of premixing those two separate values of 180 Hz and 185 Hz, like we did with monaural beats, instead we send 180 Hz to the left ear and 185 Hz to the right ear.

When we listen through headphones, a process called frequency following response is triggered in the brain. The brain perceives the difference between the left and right frequencies, which is 5 Hz, and follows along at that rate. The brainwave entrainment is therefore at 5 Hz.

Binaural beats will only be effective when listened to through headphones.

In technical terms, however, binaural beats become monaural beats when listened to through speakers.

But hang on, before you think, “oh, great”, the problem is that when listen to binaural beats through speakers we are hearing the separate frequencies of 180 Hz and a 185 Hz, one out of the right speaker and one out of the left.

So unless we have the speakers positioned near enough to our ears, the brain won't pick up on the vibrations of each, match them together and produced the frequency following response.

But, while it might seem like an advantage that you can listen to monaural beats through speakers and headphones, unless you are sitting close to a speaker, the entrainment won't be that powerful. This is also the argument with isochronic tones.

It's funny, because all the articles I read that report the benefit of not needing to use headphones always leave this important piece of information out.

You see, regardless of the technology that you are using, brainwave entrainment is usually more effective when using headphones, because the signal is very close to your ears.

The Difference in Sound Quality/Property

There is a distinct difference in sound between monaural beats and binaural. Monaural beats pulsate from a low volume to a high volume, whereas binaural have very little change in volume and appear more as a constant tone.

This one simple reason may explain the popularity of binaural beats over monaural beats.

Indeed, this is the same for isochronic tones. Out of the three, binaural beats are more pleasant to listen to. This makes it easier to mix music and sound overlay with binaural beats, making for a more marketable product.

even if some research studies show parallel results between binaural and monaural beats, we have to consider that this technology is predominantly used for meditation purposes, so it wouldn't make sense to use a sound that was off-putting and disturbed your concentration.

The consistent, comforting and often hypnotising sound of a binaural beat is perhaps its greatest quality and is what makes it so well suited to meditation and entrainment.

From a technical perspective they would both be effective means of entrainment. However, bar a few studies, pretty much every research study conducted in the area of brainwave entrainment has binaural beats as its method of choice.

One reason for this is because binaural beats are thought to be processed in a different part of the brain, called the superior olivary complex. We don't know this 100% for sure, because this area of the brain is very complex and still not completely understood, but research indicates this.

The superior olivary complex is a collection of brainstem nuclei that functions in multiple aspects of hearing and is an important component of the ascending and descending auditory pathways of the auditory system.

Because of this, binaural beats may have far-reaching clinical applications that we aren't yet aware of.

For example: for those with neurological damage, such as a patient who has trouble localizing the source of a sound such as the click of a finger, binaural beats could be used to determine where the neurological damage lies within the brain.

You might be thinking how this is possible, because surely the patient wouldn't be able to hear the binaural beats either. Well, binaural beats don't have to be audible for the process to take place, which makes research and use accessible for those with partial or full loss of hearing.

Binaural beats are said to stimulate the Thalamus. This part of the brain has several functions such as relaying of sensory signals, including motor signals, to the cerebral cortex, and the regulation of consciousness, sleep, and alertness. Because of this, studies have been conducted on the efficacy of binaural beats on these areas.

Monaural beats, on the other hand, are said to originate in the basilar membrane, an important component of the inner ear that is located inside the cochlea and moved by soundwaves that vibrate on the ear.

Because of the research, it means that there is a lot more science to support the effectiveness of binaural beats over monaural beats, and indeed Isochronic tones.

Researchers continue to choose binaural beats as a preference because they have seen conclusive results gathered in other studies. So in short, they know they have the potential to work and affect the participants of the study.

Indeed, this study supports this theory in its conclusion:

At the cortical level, the temporal integration of monaural and binaural stimuli was comparable

It may just be the case that science sees more potential in binaural beats, and that because of their sound properties they are the more marketable of the two.

Leading Brands That Use Binaural Beats

Because binaural beats have become a research standard, this has driven popularity and meant that the majority of brainwave music is produced using binaural beats. Companies may combine this with other forms of sound manipulation, but generally binaural beats form the baseline. In fact, I don't know of any well-established producers of monaural beats music.

See the following brands for reference:

If some of the above when over your head, or you simply scroll past the majority of the information to get to this summary section, here in a nutshell are the differences between binaural beats and monaural beats.

Unfortunately research funding is quite low in the brainwave entrainment area, so we don't have nearly as many studies as we would for nutrition or cancer, for example. This also means that studies are generally smaller cohorts and done for shorter periods of time, because funding is key in maximising these areas.

While we have a fairly solid amount of research for binaural beats, research for monaural beats is fairly scarce. And indeed, apart from the study I have cited above that looked at both, there aren't any others that effectively measure the two against each other across a range of areas such as sleep, anxiety and focus.

The good news is that over the past year I have received a number of emails from Masters students and university lecturers asking me for information to contribute to studies and research that they are conducting. So hopefully going forward we will see further advances in this area.

Anyway, I hope this gave you a good insight to the differences between these two technologies, and that you will go forward and experiment for yourself.