Brainwave synchronization is a state of deep awareness and intense mental clarity, caused when the left and right hemispheres of the brain become synchronized.

This is one of the *biggest* Benefits of Binaural Beats. Read on to find out why. 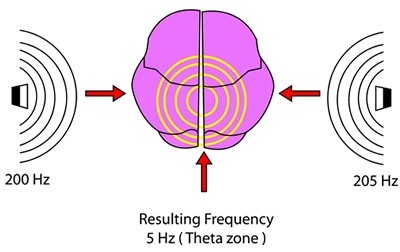 What Is Brainwave Synchronization?

Brainwave synchronization occurs when the “right brain” and “left brain” work in a deep partnership with each other.

This is also called hemispheric synchronization or brain synchrony, and happens when both sides of the brain produce the same brain waves. Read more in Binaural Beat Research.

This is a good thing for us owners / users of brains, as synchrony helps us to relax more, think more effectively, and just be a bit more reasoned overall. It feels incredibly relaxing and peaceful to experience this state too.

Binaural beats can get you into this state quicker than anything else on the planet!

What's Going On In Our Brains Now?

Normally (and very broadly speaking) the two sides of the brain work independently of each other – causing us to flit between logical, analytical “left brain” activities, and impulsive, emotional, intuitive “right brain” activities.

Have you ever felt like you're engaged in a near constant argument in your head between what “feels right” and what makes logical “sense”? Welcome to the unhappy world of brain lateralization.

As binaural beats expert Bill Harris states in his book Thresholds of The Mind: “In virtually all people, the hemispheres are unbalanced, a state called brain lateralization…”

OK… So, unbalanced hemispheres, Bill? That doesn't sound too good.

So, when our hemispheres work independently of each other (as they do for the majority of people), we feel separated, stressed, anxious and isolated. Does this sound like a typical day for you?

A good way to find out whether your brain is acting with or against itself is to ask this simple question: How are the emotions inside you at the moment?

Consider this: Do you awaken every day with a spring in your step, with ambition, focus, confidence and happiness soaring through your body?

Do you have a clear picture of what you want to achieve in life, and are you committed to making that a reality? Do you have an excited bubbly feeling inside because you know that you are on the right path for you?

Or do you (barely!) roll out of bed feeling miserable and down, worry about what might go wrong, stress about work / your boss / what you need to get done, and just feel a bit alone in the world? Do you suffer from self-doubt, anxiety and / or depression? Do you think the world is a bit of an unfair place?

To put it simply, are you feeling crap more often than you are feeling brilliant?

If your life is more like the second option, there's a good chance that you've got a case of brain lateralization (so tell your boss and take a day off work sick!)

The good news is that binaural beats and brainwave entrainment can help you to gain balance over the two sides of your brain.

They have been proven to do so. I have used them for this purpose – and my levels of happiness soared – as well as my ability to make instinctive, intuitive decisions, come up with profitable ideas, relax more – and so much more.

With very little effort, you can start to make immense breakthroughs and begin to learn how to control and take charge of your brain, so that it works as it is supposed to. Awesome.

At its simplest level, brainwave synchronization is a very relaxing state to be in. You can tangibly feel the increased production of “happy chemicals” in the brain, like serotonin, DHEA and melatonin, which all make you feel amazing.

When using binaural beats you'll also find yourself accessing happy memories or at the least becoming more optimistic about the future.

It's a very nice place to be in, as you start to focus on your strengths for a change, forgetting – or not caring – about your weaknesses.

This can be very empowering for most folks. I'm not sure why it works like this, but maybe it's hard to think sad thoughts when your brain is flooded with happy chemicals. Either way, it feels nice!

Your body will also shift into a very relaxed, peaceful slumber, and your mind will start to slow down its (often incessant) noise.

Some people (including me) even claim to feel the brain inside the skull, and sense that it is resonating and vibrating as one, distinct unit. This is truly powerful to experience.

OK, the examples above should be enough to have you running for a binaural beats download to try out. Starting at $10 for a 30 minute MP3, the value for money is clear, so if you're sold have a look at some of my recommended audios now.

There are even some additional reported benefits of brainwave synchronization which will interest you if:

(a) you're into expanding your consciousness
(b) you have an open, seeking mind, or
(c) you've taken a lot of psychoactive drugs 🙂

Resident BWE expert Bill Harris says that after attaining a state of brain synchrony we can expect “an experience of connection with the rest of the universe, accompanied by profound inner peace and happiness”.

I like the sound of that Bill, I do. But I fear some people reading this will be a little skeptical. After all, Bill was in The Secret, and not all people believe that movie was as … er … rigorously accurate as it could have been, and therefore they may not bother to listen to Bill again now.

In that case, let's try arguably the world's leading authority on brain synchronization, Dr Lester Fehmi. The good Doctor is Director of the Biofeedback Research Institute at Princeton – a little known American university you may have heard of 🙂

Fehmi sums up brainwave synchronization as:

“….an ‘into-it-ness'… (where) instead of feeling separate and narrow focussed, you tend to feel more … unified with the experience, you are the experience – and the scope of your awareness is widened a great deal… it's as if you become less self-conscious and you function more intuitively”

Wow. Did you see how this definition is very similar to Bill's “connectedness with the universe”?

Even if you're not really spiritual, does that sound like an interesting state to experience? Profound inner peace is always nice, I reckon…!

Dr Charles Strobel, Ph.D., M.D., another brain wave pro with letters after his name(!), sees brain synchronization as an “extremely beneficial” state, causing a sense of serenity and mental clarity.

Neuroscientist Jerry Levy of the University of Chicago had this to add:

“Great men and women of history did not merely have superior intellectual capacities within each hemisphere. They had phenomenal levels of emotional commitment, motivation, attentional capacity… all of which reflects the highly integrated brain in action…”

So (and I hope I'm still doing 2 + 2 and getting 4), Levy is saying that symptoms of the highly synchronised brain include commitment, motivation and improved attention – and that great men and women in history possessed these traits … which is kind of awesome really, isn't it?

Let's finish the argument for the spectacular benefits of brainwave synchronization with a quote from perhaps the greatest thinker of all time, Leonardo Da Vinci…

(OK, so I haven't really got a quote from him, but I do have a quote from Michael Gelb, who studied Da Vinci and wrote a book called “How to Think Like Leonardo Da Vinci”, so I reckon that's as close as we're going to get…!)

Gelb says that one of the seven key principles of Da Vinci's genius was:

“…his development of the balance between science and art; logic and imagination;whole brain thinking…”

Boom! If Leonardo was actively engaging in whole brain thinking, and this was one of the (just) seven key reasons he was as spectacular a genius as he was, that's good enough for me to try!

Have fun exploring the crazy world of brainwave synchronization. The benefits are clear, the barriers to entry are low, so if you want to feel more relaxed, peaceful (and arguably more creative, motivated and happy), get involved today.

This really is a trippy, fun and rewarding state to experiment with.

If you are interested in peak performance, expanding your consciousness, flow, or connecting with source, get involved with some brainwave synchronization today.

You will have a whole load of fun – and get a load of benefits too. Win – Win.