You are here: Home / Sound Healing / How the Chakra System Corresponds to the Solfeggio Frequencies Scale

If you practice healing and meditation in some form, then no doubt you have heard of the Chakras and the 7 areas in the body that make up this energy ecosystem.

You may have also come across the Solfeggio Frequencies, an ancient scale that also relates to healing and meditation.

These healing tones are centuries old and said to have been created by a Benedictine Monk by the name of Guido D’Arezzo, and most famously used in chants by Gregorian Monks.

The Solfeggio scale is comprised of 6 main healing frequencies. Listening to music created in one of the frequencies on this scale will evoke a particular healing property.

I have an extensive post on the history of this ancient scale, which can be read here, but in this post I want to document how the Solfeggio frequencies are related to the Chakra system.

So let's look at each system separately, and then how they interlink. 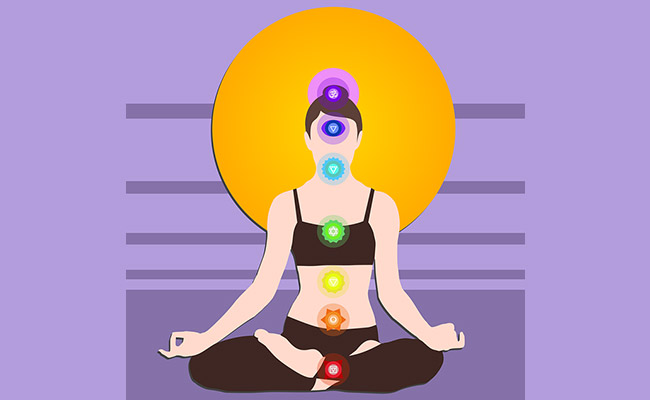 In brief, the healing properties of the ancient Solfeggio scale are as follows:

Solfeggio music tracks are created by tuning the music to a particular frequency on the scale.

This means that the music (instrumentation) within that track, be it the piano, harp, or flute, is tuned to a frequency that is different from the standard tuning of music we hear daily, which is 440 Hz.

As you may know, there are 7 Chakras (pronounced “chuhk-ruhs”) in the body.

The Chakras are situated along the length of the spine, from the pelvic floor to the crown of the head.

This system emerged from yogic philosophy and the word ‘Chakra' is commonly translated as “circle” or “wheel” – due to the centralized locations in the body where energy channels, known as nadis, converge.

It's for this reason that I refer to the Chakras as the body's energy ecosystem.

When the ecosystem is out of alignment, our emotional and physical being is negatively affected. We can then employ a wide range of healing techniques, from meditation to music and massage and Reiki, to help unblock and realign the system.

If you aren't familiar with the Chakra System, here's a rundown of the names, body locations and associated colors.

Each frequency on the Solfeggio scale maps to a specific Chakra.

It's worth noting that there may be some overlap. For example, 528 Hz is known as the ‘love frequency' and is therefore often linked to the Heart Chakra too.

Indeed the Solfeggio Frequencies overlap each other in terms of benefits; so listening to one frequency may also offer some of the benefits of another.

You may have noticed that there are 6 Solfeggio Frequencies and 7 Chakras.

This is because there are officially 6 frequencies, but 3 more have been identified since the scale was developed. The three newer frequencies are 174 Hz, 285 Hz, and 963 Hz.

The Yogic tradition settled upon 963 Hz as the frequency to map to the Crown Chakra.

This is because it is the next step up on the scale to 852 Hz, so it makes sense to be at the top of the head (crown), as it is a higher frequency.

I have also seen it written that 935 Hz is closely related to the Crown Chakra, which is pretty close to 963 Hz.

Why is Solfeggio & Chakra Mapping Useful?

It is useful knowledge for healers and therapists and meditation teachers, who might want to know which music to play while working with clients and students.

It is also useful for individuals like me who want to know what frequency to listen to when wishing to stimulate, unblock and generally realign the Chakra system.

BTW: If you'd like to buy Solfeggio music so that you can work on your Chakra system while listening to the corresponding frequencies, check out Mindvibrations.com. 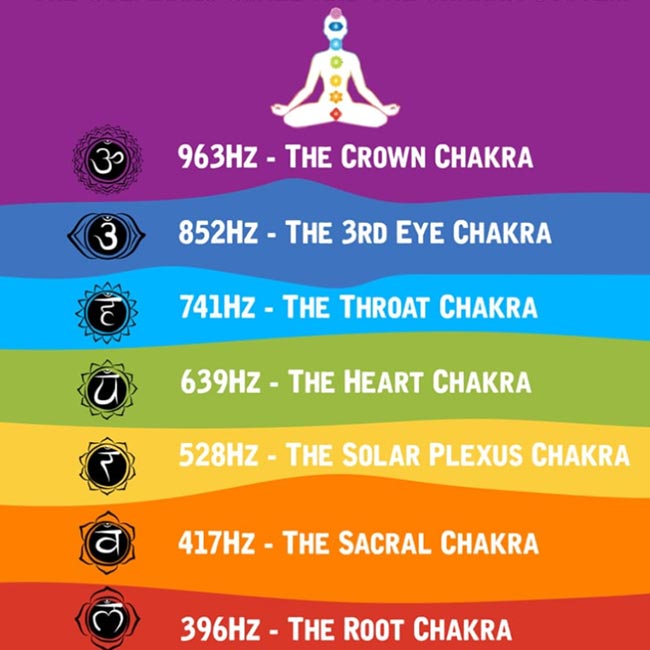 The universe is built on vibrations. Even objects that appear to be stationary are in fact vibrating, oscillating, and resonating at various frequencies.

This theory, corroborated in the modern day by science, has been the foundation of healing traditions for centuries.

Music is comprised of frequencies, and vibrations are the key to human consciousness. The two are interlinked and can be connected to stimulate positive emotions and subsequent healing; the Solfeggio and Chakra systems form a theory of connection.

I quote from Scientific American:

An interesting phenomenon occurs when different vibrating things/processes come into proximity: they will often start, after a little time, to vibrate together at the same frequency. They “sync up,” sometimes in ways that can seem mysterious (1).