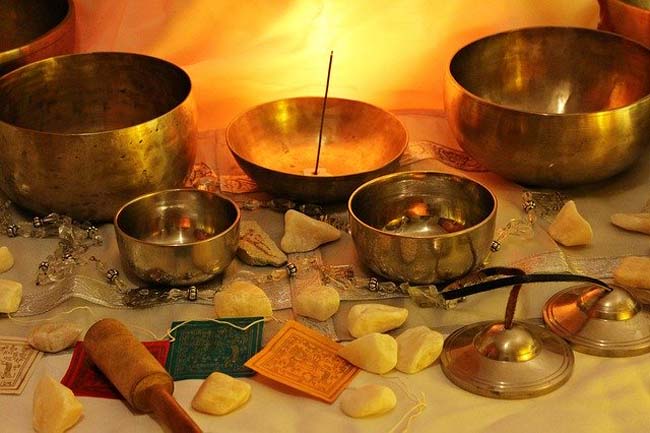 Sound healing therapy uses music to improve a person's mental and physical well being, and in some cases to open up their spiritual consciousness.

Healing through music dates back to ancient Greece when sound was used to ease stress, promote sleep, soothe pain, and even help people with mental disorders.

It appears across many other cultures too. For example, the Aborigines used the yidaki (didgeridoo) to heal physical ailments, and Native Americans and Africans used singing and chanting as part of their healing rituals.

And due to the positive results seen research trials, sound healing therapy has seen a huge resurgence in the last 20 years.

Researchers have studied how music affects the cardiovascular system and seen positive changes in blood pressure and heart rate (1).

Music has also be found to reduce anxiety and may even stave off dementia (2).

There are a number of types of sound healing therapy available, including:

So I thought it would be cool to explore and listen to some of the instruments used in sound healing.

Have a listen to some of the videos below and let me know your favorite instruments.

I personally love the flute, the rain stick, and the hang drum.

There are certain instruments associated with healing that are used over and over again in different compositions.

Many have a long history, dating back centuries, and some, like the Hang Drum, are more recent inventions.

One thing they all have in common is their ability to that soothe the mind and calm the body, and help us reconnect with Mother Nature and her Earth.

Music is a fundamental attribute of the human species. Virtually all cultures, from the most primitive to the most advanced, make music. It's been true through history, and it's true throughout an individual's lifespan.

Used by Native Americans this flute has many names in different languages based on the region and group of people who used it.

Although the exact origins are unknown, it is thought that its creation may have come about as a result of humans seeing branches or stalks with holes made by insects that created sound, possibly when the wind blew through.

The Native American flute is said to help moderate heart rate and reduce stress or anxiety. It is commonly used in music therapy and been found to help cancer and cardiac patients manage fear and pain.

With a rich history that dates back many centuries, these bowls, often called Tibetan singing bowls, are commonly used in conjunction with meditation, yoga and sound healing.

In some Buddhist practices, the bowls are used to indicate the start and end of a period of meditation. The bowls are played by rotating a small mallet around the rim.

The notes produced are often quiet and calming and many believe they positively affect the chakras (energy centers of the body).

A rainstick consists of a hollow tube filled with a small, round material such as pebbles, beads, or beans.

The tube contains pins arranged in a certain pattern, which causes the stones inside to fall against them and create the sound of rain.

It is thought that rainsticks were invented by the indigenous people of South America, and that the first rainsticks may have been made from cactus.

The sound of rain falling has always been considered a very soothing sound and is often incorporated into various types of meditation music.

Some believe that playing the rainstick will encourage rain to fall.

The loud thrum of a gong may not strike you as a very calming instrument. However, when played properly, the gong can be very soothing.

Not only have gongs been used traditionally to ward off spirits and other enemies, but they have long been used in healing rituals.

The reverberating sound is used to bring the mind into the present so that one can begin meditating or focus on a mantra or other spiritual endeavor. Gong meditations also involve chakra healing.

The hang is a more recent invention hailing from. Switzerland.

It consists of two half-shells made from metal, glued together to create a hollow convex lens.

On the top are hammered fields that produce different notes depending on how it is played.

The instrument is often played with hands and fingers to produce a soft, warm sound.

The hang can sound similar to a harp or bells and has also been compared to the music made by singing bowls. The gentle, repetitive beat patterns of the hang are soothing and hypnotic.

This percussion-stringed instrument utilizes stretched strings over a trapezoid-shaped board.

The player sits cross-legged on the floor and uses a small mallet to play the strings.

Music played on the dulcimer is soothing and gentle. The rhythm is capable of putting the listener to sleep, but is also useful for accessing a deep, meditative state.

There are many versions of the hammered dulcimer throughout the world.

Considered a percussion instrument, wind chimes are often made out of metal or wood. A weight in the middle strikes the chimes to produce the sound.

Chimes are commonly hung in gardens or outside the window where the wind will catch them to produce a melody.

Historically chimes and bells have been used to protect against evil spirits or provide noise protection to a specific area of the home.

When the wind blows, the melodious tinkling induces relaxation.

Chimes are available in many keys to produce a variety of sounds, many of which are celestial in nature and can be calming to listen to.


Many of the smaller instruments on this list can be purchased quite affordably.

This instrument, often associated with angels, dates back to at least 3500 BC and variations exist in many cultures.

By plucking the strings, soft music is produced that can be therapeutic to both mind and body.

Studies have found that harp music can help stabilize and lower blood pressure (3).

It is also thought to be able to lower perception of pain after surgery by relaxing patients.

While the healing potential of music is not yet fully understood, the harp is an instrument at the forefront of sound therapy.

The pan flute consists of several pipes of varying lengths and widths arranged in a row.

It can be made from bamboo, cane grass, or other reed materials along with wood, plastic, and metal.

The name comes from Pan, the Greek god of nature, who is often depicted with this instrument.

Music from a pan flute has a mellow, often whimsical nature that is effective for sound healing due to its relaxing properties.

The sound of breath moving through the tubes has a unique timbre to soothe the mind and calm the body.

An African instrument with metal tines that somewhat resemble spoons, the kalimba is a traditional instrument from Zimbabwe.

It is often played at weddings, social events, and during religious ceremonies. This tiny instrument can be held in the hands and played with the thumbs, giving it the nickname thumb piano.

Its harmonious tones have a reassuring effect on those with anxiety. The sweet, melodic tunes have a wide range of tones and resonance, which makes it an instrument that everyone can enjoy.

These small cymbals are commonly used by Tibetan Buddhists. Consisting of two small cymbals connected via a strap, when struck against one another they make a distinctive, high-pitched tone.

In contemporary settings, this sound is often heard in meditation timers or recordings to signal the beginning or end of the session.

Some yoga classes may also use Tingsha Cymbals to gently awaken participants from relaxing poses once the class concludes.

A djembe is a goblet-style drum originating from West Africa. Traditionally the drum was made from wood covered with animal-skin and secured with rope, but cruelty-free versions are now available.

When played with bare hands, the drum produces different sounds through the use of various beating techniques.

Rhythmic drumming has a hypnotic effect and some say the djembe can put listeners into a trance.

In sound healing, this drum is played to produce a sense of calm. Certain rhythms can replicate the sound of a heartbeat and synchronize with a person to get the heart rate to slow down.

Playing the drum is also said to be therapeutic and help with self-expression and the release of emotions.

Tuning forks were traditionally used to tune musical instruments. When struck with an object, they resonate at a certain pitch based on the size of the prongs.

Tuning forks produce a pure tone, with most of the vibrational energy at the fundamental frequency. As such you can buy tuning forks of a particular frequency, such as the popular 528 Hz frequency.

Forks have been used in the medical field to locate bone fractures, and in sonopuncture: Sonopuncture is similar to acupuncture, but it uses sound waves instead of needles to stimulate the meridian points of the body and stimulate the body's innate energy to heal itself.

Some believe that tuning forks can help clear the energy field around the body and bring balance through resonance. At specific frequencies, tuning forks are said to promote balance and mental clarity.

This large wind instrument has its origins in the indigenous people of Australia and is thought to be over a thousand years old.

These instruments can measure up to 10 feet long with those at the longer end having a lower pitch. A didgeridoo is played using circular breathing and the music is often used in cultural ceremonies and dances.

Studies on this instrument reveal that playing it can help reduce snoring and sleep apnea because it strengthens certain muscles in the airway (4).

The music is also therapeutic because of the steady rhythm it produces, making it ideal for meditation and relaxation.

The monochord is an instrument with a single string stretched over a sound box.

It is thought to have originated around the sixth century or earlier.

Monochords are used on sound healing tables, where the participant lies on top and the monochord is played underneath. Vibrations travel directly to the body where they are thought to help stimulate the cells and bring the body into balance.

The word Dorje is a Sanskrit word meaning both thunderbolt and diamond and is believed to represent firmness of spirit and spiritual power.

Like other bells or cymbals, the dorje bell can be used to mark the beginning and end of a meditation period without the need to speak.

The clear and penetrating sound produced is similar in energy to the ‘ohm' vibration.

When used during chanting it should be played at heart level using the left hand. The unique tone is said to cleanse your aura and your surroundings of negative chi.

Modern Buffalo drums, which come in a number of sizes, are inspired by the Native American version, which were made from deer or buffalo skins.

They were considered sacred and often played as part of a ritual or important ceremony. Some believe the drum helped connect with spirits who could provide protection.

When played by tapping with a soft mallet, the drum produces a small resonance.

Depending on how hard the drum is struck, the sound can range from loud to low but always with an undercurrent of vibration.

These drums are used played both as a musical instrument and to induce a therapeutic effect while chanting.

The use of rattles goes back hundreds of years. Egyptian and African shamans used rattles as part of various rituals, and many shamans in the modern day continue to so the same.

Some ancient rattles were made from gourds that were hollowed out and filled with various materials to make a swishing or rattling sound.

Contemporary uses include using the rattle as a musical instrument for entertainment or incorporating it into meditative practice for relaxation.

The sound can be calming, and the process of shaking or twirling the rattle is therapeutic.